Home All Articles Archive No Fear? 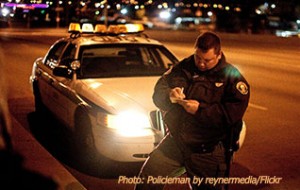 Fear is a form of reverence or respect. Think about it: you magnify the thing you fear as something powerful. You must reverence and obey “it” or else face the consequences. We reverence the laws of gravity–what goes up, must come down. After all, wise people don’t sky dive without gear! We reverence nature–no one goes into the ocean without a flotation device if they don’t know how to swim. We reverence the government—if we break the law, there will be consequences such as fines or even jail.

We know it’s wise to be knowledgeable about the laws of physics and the forces of nature and respect them. Why don’t we realize we must also reverence their Creator—God?

“The fear of the Lord is the beginning of knowledge: but fools despise wisdom and instruction.”

When we disobey God, there will be consequences. If we go before an earthly judge and are found guilty, he will place a judgment against us. We will have to pay a fine, perform community service, make restitution or even go to jail. The concept of “right” and “wrong” and punishing those things he says are evil comes from the Lord. He created this world and He has established the principles for governing it. (This is easy to understand—you don’t let anyone come into your home and tell you how to run it, right?)

Refusal to accept God’s existence and ignorance of his laws, will not change the consequences of breaking them. This ancient principle used in Roman law–“Ignorantia juris non excusat”, which means “ignorance of the law does not excuse”–is even foundational in our modern legal system. John Selden (English antiquarian and jurist, 1584-1654), explained it this way: “Ignorance of the law excuses no man: Not that all men know the law, but because ’tis an excuse every man will plead, and no man can tell how to refute him.” Likewise, the Bible says…

“For the invisible things of him from the creation of the world are clearly seen, being understood by the things that are made, even his eternal power and Godhead; so that they are without excuse: Because that, when they knew God, they glorified him not as God, neither were thankful; but became vain in their imaginations, and their foolish heart was darkened. Professing themselves to be wise, they became fools…”

Yet, God is fair. He does not punish the innocent along with the guilty. The problem is—we were all born guilty! So will we all face God’s judgment—a sure death sentence and then eternity in hell–the prison for rebellious spirits? Not necessarily.

God is merciful. Because he loves the crown of his creation—human beings—he created a loop-hole in his own law. Through this exception, God can punish sin and fulfill the law, without destroying his own disobedient creation. Here it is…

The loop-hole is Jesus. The decision we make about Jesus determines our eternal punishment or our eternal pardon.

“Jesus saith unto him, I am the way, the truth, and the life: no man cometh unto the Father, but by me.

What have you decided about Jesus? We would be wise to fear (reverence) the Lord and accept His Son, Jesus.

“Do you think I have come to give peace to the earth? No! Rather, strife and division! From now on families will be split apart, three in favor of me, and two against—or perhaps the other way around. A father will decide one way about me; his son, the other; mother and daughter will disagree; and the decision of an honored mother-in-law will be spurned by her daughter-in-law.”

Need Proof of God’s Existence? It’s hard to respect someone you don’t believe exists. The Bible says nature itself is evidence of God’s existence. Contrary to what you may have been taught, scientific and archaeological evidence actually points towards a “divine architect”. Hear what expert Dr. Don Patton has discovered in his lecture “What your University Professors Won’t Tell You”